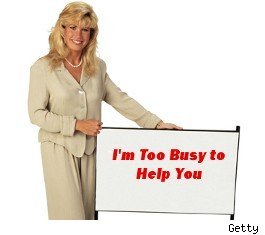 What If My Real Estate Agent Fails Me?

According to the National Association of Realtors 2009 Member Profile, the average real estate sales associate in 2009 made about $27,000. That’s the average, meaning that for every top producer putting $200,000 or $300,000 in his or her pocket, there are a dozen agents making basically minimum wage. Put it this way: a receptionist in an office can make about $30,000 to $35,000 a year, which is more than most of the agents in that office probably make.

This is just an astounding, tragic statistic, one that most people in the industry just blithely accept in a commissioned sales environment. Yes, it includes a lot of part-time agents, or agents who are new to the business, but that’s not really the reason that most agents make what is essentially a minimum wage.

So what’s the real reason? If I ask a group of agents why, they’ll say that most agents don’t do enough lead generation. Some will say, of course, that their brokers don’t do enough lead generation, like Shelley Levene in Glengarry Glen Ross complaining that he never gets “the good leads.” But no matter how you slice it, it always comes back to sales opportunities: agents would sell more houses if they had better leads.

That’s just nonsense. The problem with our industry isn’t the leads — we have plenty of leads. NAR says that 5 million homes are going to be sold this year. (Of course, NAR also has about a million members, so do the math).

Here’s the reason: most agents aren’t very good at their jobs. It’s as simple as that. If you’re a doctor, and you don’t have any clients, it’s not a matter of not having enough sick people. If you’re a lawyer, sitting around all day waiting for phone to ring, it’s not because people stopped having legal problems. It means you’re not very good at your job.

That’s the sad truth, but it’s not the agent’s fault. It’s the industry’s, which has never focused training on core competencies, instead allowing licensing classes to devolve into long discourses on “fee simple absolutes,” coaching courses to be dominated by prospecting methology, and ongoing education to be dedicated to ethics, compliance, and the hot topic of the month (the eight hundred or so short sale certifications that are now out there).

And the problem certainly is not that we don’t do enough as an industry to teach agents how to generate leads — indeed, virtually the entire sales training apparatus in the industry is about lead generation, whether it be through prospecting or sphere development or marketing online or whatever.

No, the problem is competency. Agents who are good at their jobs sell a lot of houses, just like doctors who are good at their jobs develop thriving practices. Show me a group of top performing agents, and I’ll show you a group of people I’d probably be willing to list my home with. They’re probably agents who have basic sales skills, of course, but I bet that they also know how to take care of clients, how to do their jobs.

Think about how ludicrous it is that the industry spends so little time teaching competency, instead focusing on prospecting or ethics compliance. The industry spends all its time teaching agents how to prospect on the sales coaching side, then spends the rest of its time on the NAR side scaring everyone about ethics and compliance. No one teaches basic competency: learning skills that actually matter in the field, and learning how to deliver an amazing client experience.

One reason, of course, is that NAR itself is an organization largely staffed by people that don’t sell a lot of houses — all those nattering busybodies filling our local boards who themselves sell three houses a year and therefore have the time to devote to going to a lot of meetings to debate policies over coffee. Look at a local NAR board, and add up all the transactions closed in 2010 by all the members put together, and I’ll bet in most cases there are 50 agents in the local region who sell more homes than the entire group. Go ahead, prove me wrong, send me your local board members and their 2010 production. There might be exceptions, but I’m betting that I’m right about the rule.

Listen, my point is not to denigrate the profession. I love real estate agents, even the ones that for some unholy reason don’t work with my company. But we all know that this profession has to become better at servicing the needs of clients, and it starts with each individual real estate agent. It should be shocking — and bracing — to hear that most real estate agents don’t make as much as the receptionists. The question is what do you do next?   Do you keep doing the same old things that don’t work for you, or do you start building new skills, following new systems, and taking a new approach to your business.

If you happen to find yourself in this situation, where your agent has failed you…. FEAR NOT!  We have 4 awesome things that you can do right now to help get your house sold.  Check it out:

Here are 4 things you can do right now to sell your house.