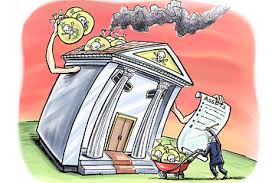 These Dirty Tricks By Banks Are Hurting Borrowers

Several of America’s largest banks and mortgage lenders have been busted in a new scam. It’s crushing people’s credit and holding them hostage. So how can regular individuals push back? How can they stop banks from sabotaging them, and improve their financial futures?

Banks Back in Court for Collection Scams

At least 5 U.S. banks and lenders have landed back in federal court. This time for ignoring bankruptcy laws and satisfied debts. They’ve still been trying to collect on debts they have no longer been owed for over 7 years. Not only have they been harassing consumers, but have held their credit reports hostage with incorrect information according to a Justice Department investigation. This includes Bank of America, Chase, and Citigroup.

The investigations were finally triggered by attorneys helping clients who were being turned down for jobs because of erroneous negative marks on their credit. Essentially, people’s entire lives have been held ransom unless they paid banks money that they didn’t even owe. Chase and Bank of America reportedly claim they’ll fix the issue in the next few months according to coverage by the New York Times.

Unfortunately, as we saw with the massive multi-billion dollar mortgage settlement for robo-signing and scooping people’s homes in foreclosure illegally, that doesn’t mean it will stick. Since 2005 banks, have proven again and again that they just can’t and won’t be controlled, forced to abide by the laws, or even live up to settlement agreements. So what’s their deal? Why is this just a symptom of a much larger scam? How can regular people win?

Scam of the Century

While quick to point fingers, spin the media, and squeeze the little guy out of his house, there is no question that banks and mortgage lenders have blatantly and flagrantly wielded the biggest and boldest real estate, finance, and mortgage scams of the century. Some might even say they do it as the rule, not the exception.

Robo-signing, forced placed insurance, mortgage origination, appraisal, securitization, and credit fraud are just some of the massive multi-billion dollar scams we’ve been alerted to in the last seven years.

Conspiracy theories aside this trend does beg the question as to what else they have been orchestrating. Some cases like the credit issue, refusing or wiggling their way out of modifying home loans or approving short sales are often put down to simple greed, short sightedness, incompetence and lack of efficiency. But let’s look at the big picture. There are some great bankers out there. There are even some banks and financial services companies which appear to really be trying to help people and be innovative. But when you look at the large scale (national and global) pump and dump of the housing market, quiet holding of hundreds of billions of real estate offline, and penalizing consumers with higher rates and fees for having bad credit (which they caused), some have to wonder. This could not just be described as one of the biggest scams of the century, but perhaps international history.

Meanwhile banks are busy buying real estate, building new branches and offices, and lending with penalties on those that have had their credit hurt by all this. It’s mind boggling that these institutions are still legally able to exist. If you tried any one of these scams one time there is a good chance you’d be in prison for quite a while. Some say these lenders are too big to be allowed to fail. But maybe they are too bad to be left intact. After all they are not just hurting individuals and stealing their financial futures and that of their children, but those same individuals keep bailing them out with what they have left too. And the example they are setting influences many other businesses to try equally unethical practices. So maybe it would be in everyone’s best interest to dismantle them. To cash shareholders out and close them down. Or perhaps to at least make individual shareholders responsible for the actions of their banks. That might create a whole new level of responsibility. Make an example of them.

Of course you are probably more likely to win the lottery twice before you see this happen. So what can individuals do to fix their own situation, and buffer themselves from future scams?

4 Ways to Beat the Banks

Don’t be held ransom. Check your credit. Challenge negative items. When necessary, get the law involved. If lenders won’t fix it after being asked nicely; hire an attorney, report them to consumer protection agencies, and contact politicians. Help others find solutions so that they can do the same.

If these big banks are still buying real estate, it is clearly a smart financial move. Buy homes and businesses. Do it while prices and rates are low. Let the banks help bring up your wealth by riding on their coattails. But buy property that you can hold for the long term – that you can manage to hold even in leaner times so that banks can never take it from you.

If you must borrow to buy real estate, then choose better lenders. Team up with friends and family members, pool money via crowdfunding, leverage grants, and look to alternative lenders. There are so many alternative lending sources today. Many of which will help benefit other regular people rather than over-sized unethical institutions. If you absolutely must go to one of these big banks to get a mortgage loan then watch all the fine print, know which attorney you’ll call when they try to scam you, and pay it off quickly.

If you bank isn’t treating you in an awesome way, if they aren’t showing you their appreciation for being a valued customer every day, then take their power away. There is very little need for old school bank accounts with heavy fees and poor service today. They only have power if people keep feeding them deposits. So put your money somewhere else. Become the bank and give others somewhere better to put their money too. Use that money to invest in real estate or make better mortgage loans as a group.